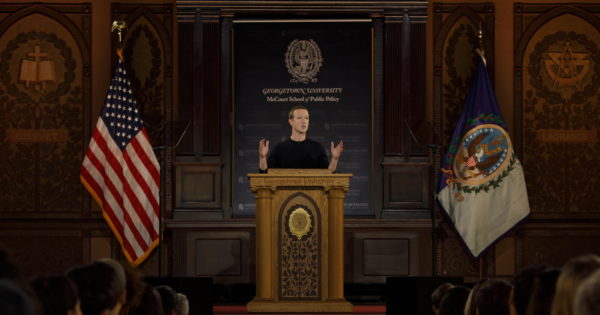 Facebook CEO Mark Zuckerberg spoke about his views on free speech and expression at Gaston Hall at Georgetown University in Washington, D.C., Thursday.

Zuckerberg focused on giving everybody a voice and cautioned against laws that undermine free expression and human rights.

The video of the full speech is available here, and following are five key areas he addressed during his talk.

Zuckerberg said, “I believe that we have two responsibilities: To remove content when it could cause real danger as effectively as we can, and to fight to uphold as wide a definition of freedom of expression as possible—and not allow the definition of what is considered dangerous to expand beyond what is absolutely necessary. That’s what I’m committed to. But beyond these new properties of the internet, there are also shifting cultural sensitivities and diverging views on what people consider dangerous content.”

Later in his speech, he added, “I’m committed to the values we’re discussing today, but we won’t always get it right. I understand people are concerned that we have so much control over how they communicate on our services. And I understand people are concerned about bias and making sure their ideas are treated fairly. Frankly, I don’t think we should be making so many important decisions about speech on our own either. We’d benefit from a more democratic process, clearer rules for the internet and new institutions.”

With campaigning for the 2020 U.S. presidential election in full swing, this topic grabbed headlines last week when candidate Sen. Elizabeth Warren (D-Mass.) created a political ad on the social network making the blatantly false statement—and immediately disclosing that it was a false statement—that Zuckerberg endorsed President Donald Trump for re-election.

Warren’s ad was a response to the Trump campaign’s ads on social platforms that contained false information, as well as Facebook’s declaration last month that third-party fact-checkers would not review posts from politicians.

Speaking about misinformation in general, Zuckerberg said, “Take misinformation. No one tells us they want to see misinformation. That’s why we work with independent fact-checkers to stop hoaxes that are going viral from spreading. But misinformation is a pretty broad category. A lot of people like satire, which isn’t necessarily true. A lot of people talk about their experiences through stories that may be exaggerated or have inaccuracies but speak to a deeper truth in their lived experience. We need to be careful about restricting that. Even when there is a common set of facts, different media outlets tell very different stories emphasizing different angles. There’s a lot of nuance here. And while I worry about an erosion of truth, I don’t think most people want to live in a world where you can only post things that tech companies judge to be 100% true.”

He pointed to the transparency provided by Facebook regarding political advertising, including its Ad Library—which is available to everyone, whether they have a Facebook account or not—and he said of the decision not to fact-check content from politicians, “We don’t do this to help politicians, but because we think people should be able to see for themselves what politicians are saying. And if content is newsworthy, we also won’t take it down even if it would otherwise conflict with many of our standards.”

Finally, he reiterated his belief that private companies should not be tasked with censoring content or deciding what is truthful, saying, “I know many people disagree, but, in general, I don’t think it’s right for a private company to censor politicians or the news in a democracy. And we’re not an outlier here. The other major internet platforms and the vast majority of media also run these same ads. As a principle, in a democracy, I believe people should decide what is credible, not tech companies. Of course, there are exceptions, and even for politicians, we don’t allow content that incites violence or risks imminent harm—and of course we don’t allow voter suppression. Voting is voice. Fighting voter suppression may be as important for the civil rights movement as free expression has been. Just as we’re inspired by the First Amendment, we’re inspired by the 15th Amendment, too.”

Zuckerberg repeated a statement he has made in the past: “Given the sensitivity around political ads, I’ve considered whether we should stop allowing them altogether. From a business perspective, the controversy certainly isn’t worth the small part of our business they make up. But political ads are an important part of voice—especially for local candidates, up-and-coming challengers and advocacy groups that may not get much media attention otherwise. Banning political ads favors incumbents and whoever the media covers.”