As TikTok walks a political tightrope, Girls Who Code finds its voice there 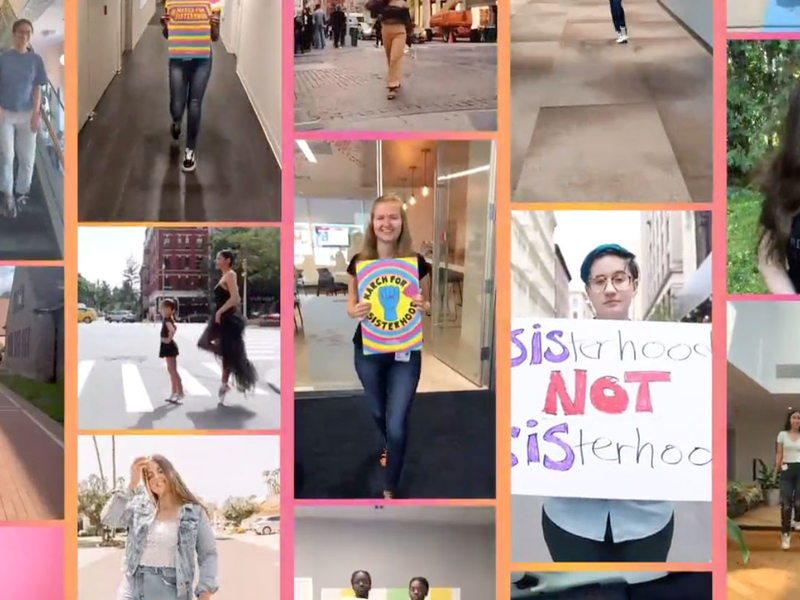 Girls Who Code brought its sisterhood to TikTok, just in time for the International Day of the Girl Child.

What better place to spread a message about digital equality of the sexes than an app that has the attention of millions of young girls? TikTok, the catchy video app owned by Chinese-based ByteDance, has an audience that is 60 percent female and 69 percent of users are between 13 and 24 years old, according to internal marketing documents from the company.

Deborah Singer, chief marketing officer at Girls Who Code, says the organization encouraged girls around the world and their supporters to share videos to TikTok with the hashtag “march for sisterhood.” Now, almost 700 million video views later, by TikTok’s calculation, “we were just kind of blown away by the success,” Singer says.

Girls Who Code made use of TikTok’s viral-inducing hashtag challenges, which marketers are familiar with since they can sponsor their own hashtags, starting at $150,000. Girls Who Code’s campaign was coordinated with TikTok for Good, the philanthropic arm of the app, so it did not cost the group money. What happened was TikTok promoted “#MarchForSisterhood” on its homepage the weekend leading up to Oct. 11, the Day of the Girl. Then the TikTok community took over from there, sharing videos using the hashtag.

“We saw videos of everyone, from a computer science major in Utah talking about the need for solidarity, to a sorority in Alabama, which did a march kind of on their way to a tailgate,” Singer says.

Singer was a little skeptical, though, seeing the number of videos with the hashtag top 250,000, generating more than half a billion views, she says. Once a hashtag is presented to the masses, anyone can use it, and often TikTok teens jam all the popular hashtags on their videos to ride the trend. It can be hard to tell how many of the videos are aligned with any given cause or brand message.

Singer says, for the most part, the videos adhered to the message of girl power, while staying true to the general lightheartedness of TikTok. “The whole team started going really deep and looking at all of the videos,” Singer says. “And there were a range of them. There were people excited by the hashtag and kind of doing their own thing and there were people super-aligned with the cause.”

TikTok has begun to face scrutiny as its popularity rises in the U.S., however. At the same time that the app was promoting solidarity with women and LGBTQ communities stateside, it was being criticized for censoring marchers in Hong Kong, who are fighting oppression against China.

Also, in the U.S. it recently worked with GLAAD, the LGBTQ advocacy group, to promote the “this is me” hashtag for “coming out day” this month, a day for people to express their sexual identities. Just weeks before promoting the inclusive message, The Guardian reported that TikTok had allowed countries with anti-LGBTQ policies, like Turkey, to block videos that promoted homosexuality. TikTok responded to The Guardian by saying that it was an old policy that is no longer in use.

Since the swell of reports of censorship, TikTok has taken pains to figure out its own identity. This week, the company hired K&L Gates, a global law firm, as consultants to help it iron out its policies.

“I joined TikTok at the start of this year because I found the platform’s fun and entertaining environment to be a breath of fresh air in an online world that has increasingly migrated toward argument and divisiveness. TikTok is different,” said Vanessa Pappas, general manager of TikTok in the U.S., in a blog post this week. “Our mission is to inspire creativity and bring joy.” Pappas joined TikTok this year after working at YouTube as the head of creative insights, among other roles.

There are questions about its censorship policies, but the app is fertile ground for organizations to excite young people, Bogliari says. “Gen Z is really open to social causes,” Bogliari says. “And contrary to Facebook and Instagram, where it’s all about themselves, TikTok is more about them being open.”

As for Girls Who Code, Singer says the group felt no pressure from TikTok to control its hashtag or who used it. “We were really upfront with them that the goal of ‘March for Sisterhood’ was to provide a platform for girls to march for whatever causes they care about,” Singer says. “We were upfront with that and they were really supportive.”

But what if a Hong Kong protester used it, would that be visible on TikTok? Girls Who Code could not tell whether any content moderation was done behind the scenes to limit certain types of videos, Singer acknowledged.

Singer says that the group was still comfortable with TikTok, because all platforms are navigating thorny content questions. For now, TikTok is a place the organization can get its message out.

“Our values are sisterhood and standing up for our girls and making sure that they have a voice on these platforms where girls tend to be the dominant users,” Singer says. “To the extent that we start to hear any concerns from our community, that may be the point where we think about whether a platform was right for our partnership.”