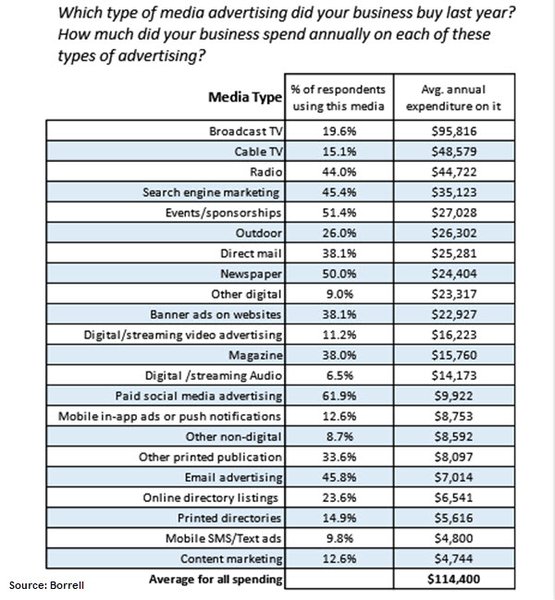 They are also heavily engaged in geo- and other targeting.

These are a few highlights from the latest annual survey of local U.S. advertisers by Borrell Associates, being released today.

This year’s results
reflect responses from 2,288 local advertisers between April and July 2019, solicited from active advertiser lists of media companies across the country. Only those who answered all 40-plus questions
were included in the report results.

On average, respondents’ 2018 spending on traditional media was 1.9
times more than on digital media: $29,442 versus $15,397. Broadcast TV, cable TV and radio led spending, but  search engine marketing was fourth, followed by events/sponsorships (see table
above). 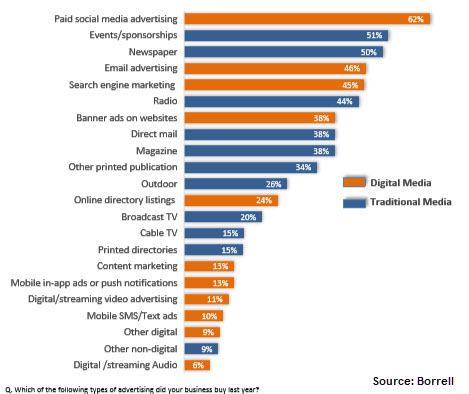 However, for 2019, print media continue to be prime targets for reduced
spending, while nine of the top 10 media to see increases in spending are digital. Fully 67% are planning to increase spend on digital video ads, 61% on digital audio, and 57% on mobile SMS messaging,
search engine marketing and social media ads, 54% on mobile app ads, and 52% on content marketing: 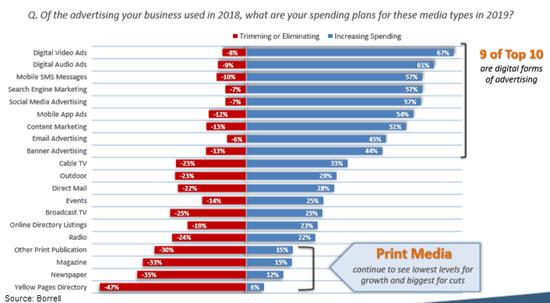 Of the 11% who report using digital/streaming video, 84% distribute video
on their own social media pages, 75% each on YouTube and their own websites, and 62% pay for video placement on social media.

Digital video ads are rated very or extremely effective by 41%, broadcast TV spots by 35% and addressable TV buys by 35%.

Targeting is used by 85% of respondents, and 79% of
those who buy targeted ads are using geo- or location targeting. More than two-thirds (67%) use geo- or location-based targeting, 54% use age or gender, 40% use digital behavior, 30% customer metrics
(e.g., loyalty, transaction value), and 26% purchase behavior.

Regarding best sources for new customers, non-digital and digital advertising are reported to be about even (52% versus 48%). But
looking at which specific channels are best at driving new customers, Facebook is #1 (cited by 33%), followed by referrals from friends/family (27%), search engine marketing (20%) paid social (19%)
and company website (18%).

Half Are Confused About Spending, Results

Half (51%) of respondents agreed with the famous declaration by John Wannamaker, “Half the money I
spend on advertising is wasted. The trouble is, I don’t know which half.” More than a third (37%) disagreed, and 12% weren’t sure.

Further,
one in two (48%) report having no specific method to determine how much is spent on advertising. Percent of gross revenue is used by 15%, percentage increase/decreae over previous year by 13%, and
“same amount every year” by 10%.

Local advertisers also have some pointed suggestions for media sellers, including “Stop selling me things and bring me solutions,” and
dropping the jargon in favor of “concrete ideas and numbers.”

A full summary is available on Borrell’s site.