Mozilla is using a six-minute augmented reality documentary to pressure Snapchat, Instagram and other companies that may be using facial emotion recognition technology.

The nonprofit, which developed the Firefox web browser, said Stealing Ur Feelings is an attempt to reveal how this type of artificial intelligence “could be easily misused to profit off consumers, promote inequalities and even destabilize democracy.”

After viewing Stealing Ur Feelings, people are prompted to smile at the camera in order to sign a petition demanding that Snapchat reveal whether or not it is using the technology, the patent for which was approved in August 2018. 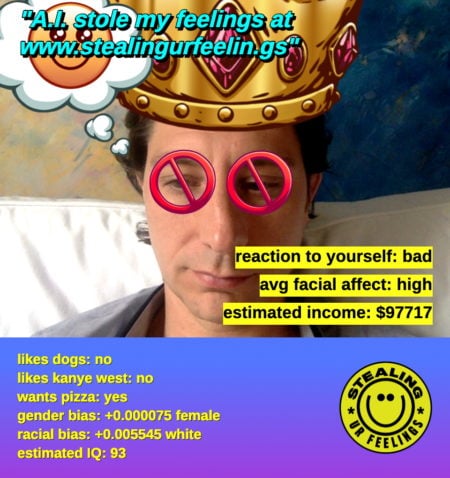 Stealing Ur Feelings has already screened at festivals and exhibits including the Tribeca Film Festival, the Open City Documentary Festival, the Camden International Film Festival and the Tate Modern, and it will screen at Tactical Tech’s Glass Room installation in San Francisco later this year.

It has also been inducted into the Massachusetts Institute of Technology docubase and praised by the Museum of the Moving Image.

Mozilla said Stealing Ur Feelings was made possible through a $50,000 Mozilla Creative Media Award, and it marks the latest advocacy project to highlight the unintended consequences of AI.

Earlier efforts include Survival of the Best Fit, an online role-playing game that shows the effects of bias in hiring, and Monster Match, a dating simulator that exposes how algorithm bias affects dating applications.

Mozilla executive director Mark Surman said in a release, “AI is increasingly interwoven into our everyday lives. Mozilla’s Creative Media Awards seek to raise awareness about the potential of AI and ensure that the technology is used in a way that makes our lives better rather than worse.”

New York-based artist and engineer Noah Levenson, creator of the film, added, “Facial recognition is the perfect tool to extract even more data from us, all the time, everywhere—even when we’re not scrolling, typing or clicking. Set against the backdrop of Cambridge Analytica and the digital privacy scandals rocking today’s news, I wanted to create a fast, darkly funny, dizzying unveiling of the ‘fun secret feature’ lurking behind our selfies.”