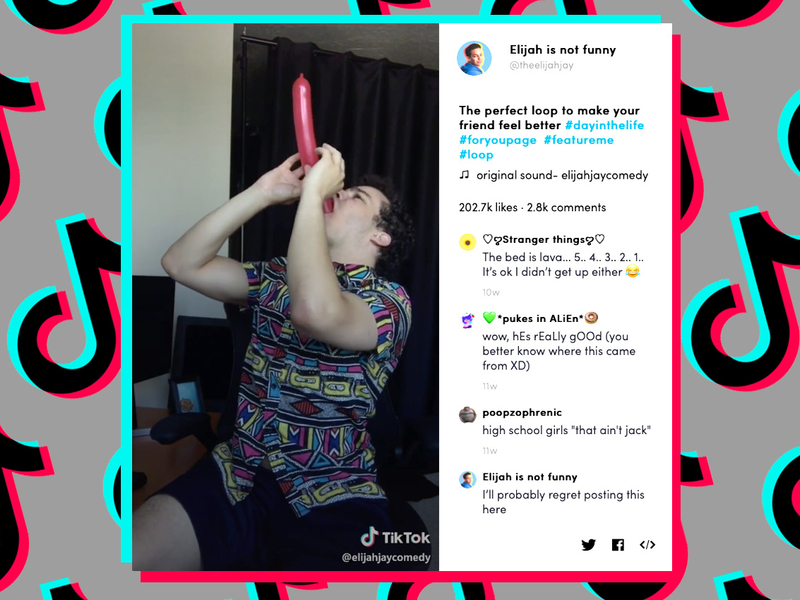 ‘Where is my money?’
Jay is not just in it for the likes though. The 23-year-old aspiring digital media star, who lives in Los Angeles, is trying to find an audience on social media, across TikTok, Snapchat, Twitter, Instagram and YouTube. He is hoping to make money as an influencer, a person with an online fanbase that brands often hire as marketers.

When he learned TikTok used his image for an ad without consulting him, he took his case to Twitter: “Hey TikTok, why are you using my video as a Snapchat ad to promote your app? And where is my money,” he tweeted.

TikTok has become a major online advertiser in its push for ever more users yet its ads are often widely mocked online for their prevalence on rival apps, running constantly on Snapchat, Instagram and YouTube. The ads typically feature videos from users like Jay with links so viewers can download the app.

In September, TikTok was the No. 1 advertiser on Snapchat and the No. 2 advertiser on YouTube, according to SensorTower, an app marketing analytics firm.

Other companies have used everyday users in ad campaigns. Facebook recently featured members of Groups in commercials called “More Together,” which appeared on TV among other media. Snapchat is in the middle of a marketing campaign called “Real Friends,” which highlights the personal lives of its users. But those are ad campaigns with the consent of the users.

“I’m not getting anything out of it,” Jay says of the TikTok ad he appears in. “When they’re getting everything.”

TikTok is owned by ByteDance, which is based in China but grew into a sensation in the U.S. The app has been downloaded more than a billion times, but the company does not disclose active user numbers, so it is hard to compare it to the public companies in the U.S. like Snapchat, Twitter, YouTube and Facebook. Snapchat, for instance, has 203 million daily active users, the company said in its latest financial report.

Creator divide
Like Snapchat, Instagram and YouTube, creators are integral to the success of the platform. These are the power-users who post the most videos, gain the most followers and ultimately help keep the place active. TikTok is still trying to figure out how it can help foster a creator community and help the influencers make money for their work. YouTube creators split ad revenue with the platform, for instance.

TikTok recently launched Creator Marketplace, which is meant to connect brands to the talent on the platform for their marketing. There are also tipping programs, where users can donate to their favorite creators. “We’re starting to see more creative opportunities for creator and brand collaborations,” a TikTok spokeswoman said in an e-mail statement. “We work to make sure that they not only have the tools they need to be their best creative selves on TikTok but also continue to have a positive experience.”

TikTok declined to comment on its own use of its users in its marketing.

Creative rights can be a divisive subject online, and the digital platforms typically have language in their terms of service that give them permission to repurpose people’s videos and photos.

Owning it
Digital companies may have the right to incorporate users into ads, says Nick Cicero, co-founder of social media analytics firm Delmondo, but it is bad form not to work with the creators directly. “If they were just using users’ videos and weren’t interacting with them and building a relationship with them, then this seems like a little bit of a misguided strategy,” Cicero says. “Maybe it was an oversight.”

Jay is not the only everyday user to appear in one of TikTok’s ads. Radd Shogo says friends also alerted him to his role in the app’s marketing. “I didn’t know they used it at all,” Shogo says during a recent phone interview. “But friends on Snapchat were seeing it. It was crazy.”

Shogo was not uneasy about the ad attention, however. “I was so hyped,” Shogo says. “I have never been in an ad before.”

The 20-year-old Shogo, like Jay, wants to parlay social media into a full-time job by creating videos with his twin brother, based in Los Angeles. Shogo and Jay are both stage names, and they did not want to use their legal names for this story.

“I’m cool with it,” Shogo says of TikTok using his image. “They own all of it. When you sign up it shows you they have rights to all of your videos.”

Shogo even tried to reach out to TikTok by sending the company a direct message on Instagram to see if there were any more opportunities to collaborate.

TikTok did not respond, however, he said.