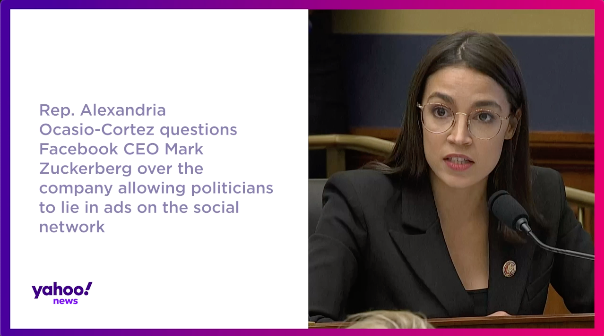 “I just want to know how far I can push this in the next year,” the congresswoman said.

Facebook drew concern this month when it quietly dropped its policy banning false claims in its advertising ― including political advertising ― in a broad defense of free speech. Critics expressed fears that politicians or other parties acting in bad faith could abuse the policy to spread falsehoods that could impact elections.

Ocasio-Cortez quickly managed to stump Zuckerberg by asking whether she would hypothetically be allowed to run political ads claiming that Republican candidates voted for the Green New Deal, the wide-ranging environmental legislation championed by the Democrats’ progressive wing.

“Congresswoman, I don’t know the answer to that off the top of my head,” Zuckerberg responded.

“So you WILL take down lies or you WON’T take down lies?” @AOC runs Zuckerberg through a series of hypothetical ads she could run with lies in them, and he can’t say if they’d stay up. pic.twitter.com/wlqqvZOvWy

@AOC continues to hammer Zuckerberg till she runs out of time.

“In your ongoing dinner parties with far-right figures, some of who advance the conspiracy theory that white supremacy is a joke did you discuss so-called media bias against conservatives?”

The House Financial Services Committee had convened the public hearing out of concern on Facebook’s proposed digital currency, Libra. But members also used their time to grill the Silicon Valley billionaire about his company’s troubled record on privacy, data and the spread of misinformation.

Prior to her Green New Deal scenario, Ocasio-Cortez presented Zuckerberg with another hypothetical ad that was easier for him to answer. Asked whether she could pay to target predominantly Black area codes and tell them the wrong election date, Zuckerberg replied with a definitive no.

“I think lying is bad, and I think that if you were to run an ad that had a lie, that would be bad,” Zuckerberg told Ocasio-Cortez.

He later added: “In a democracy, I believe that people should be able to see for themselves what politicians that they may or may not vote for are saying so they can judge their character for themselves.”

Zuckerberg clarified that calls for violence or attempts at voter suppression are not permitted on Facebook. But he did not have a straight answer on whether or not the company would take down objective lies, instead saying, “it depends on context.”

Help us tell more of the stories that matter from voices that too often remain unheard.