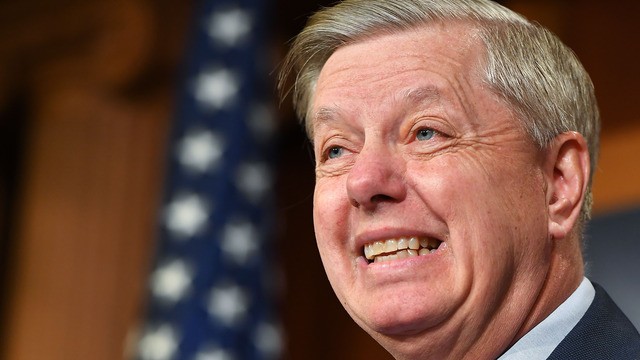 Lindsey Graham does not support the Green New Deal.

You would be forgiven for thinking otherwise, however, after watching a paid Facebook ad asserting that the Republican senator from South Carolina is in favor of the progressive proposal. The ad, paid for by a self-described group of left-leaning “trolls,” wouldn’t be notable except for the fact that Green New Deal advocate Alexandria Ocasio-Cortez called out this very scenario earlier this week.

On Wednesday, Facebook CEO Mark Zuckerberg sat in front of Congress to answer questions about his proposed digital currency Libra. The questions, of course, didn’t stick to that topic.

With misleading and outright false Facebook ads run by the Trump presidential campaign in the news, Rep. Alexandria Ocasio-Cortez used her allotted time to grill the CEO on his company’s policies regarding false political ads.

“Could I run ads targeting Republicans in primaries saying they voted for the Green New Deal,” asked Ocasio-Cortez.

Zuckerberg replied, “Congresswoman, I don’t know the answer to that off the top of my head.”

He later added, “I think probably.”

This exchange took place on Oct. 23. The ad asserting that Sen. Graham supports the Green New Deal — including an altered video clip of him saying he believes in the proposal — came out on Oct. 24.

Importantly, this is not an ad run by Ocasio-Cortez or her campaign. Rather, it appears to be a tongue-in-cheek attempt to highlight her point — that Facebook is happy to accept money for false political ads in the run up to an election.

And, to be clear, Facebook did accept money for the above embedded ad. Although, granted, not very much. The company’s ad-tracking tools show that the group behind it, The Really Online Lefty League, spent less than $100 to gain somewhere under 1,000 impressions.

Who was shown the Green New Deal ad.

This specific example of people intentionally thumbing their noses at both Republicans and Facebook is clearly meant more as a provocation than a real attempt to affect any looming election. But that doesn’t mean the next effort, by some other actor, will tread as lightly.

This is an issue that won’t magically resolve itself, as Zuckerberg has publicly insisted that the false-ad floodgates will remain open.

In an Oct. 17 speech at Georgetown University, Zuckerberg defended his right to accept money to spread political falsehoods. He attempted to frame this policy as one of only the noblest intentions, asserting that, “in a democracy, I believe people should decide what is credible, not tech companies.”

This, of course, is a dodge. By allowing some content on its platform, and removing others, Facebook has already taken an active hand in managing what information its users are exposed to. Accepting money to spread political lies mean to influence the electorate just so happens to pay.

“This ad did not come from a politician,” he told Mashable over email, “so it’s eligible for review from our third party fact checking partners. We have sent it to them for review.”

In other words, paying to spread lies about politicians via Facebook ads is fine as long as it’s a politician that’s doing the paying. Got it.