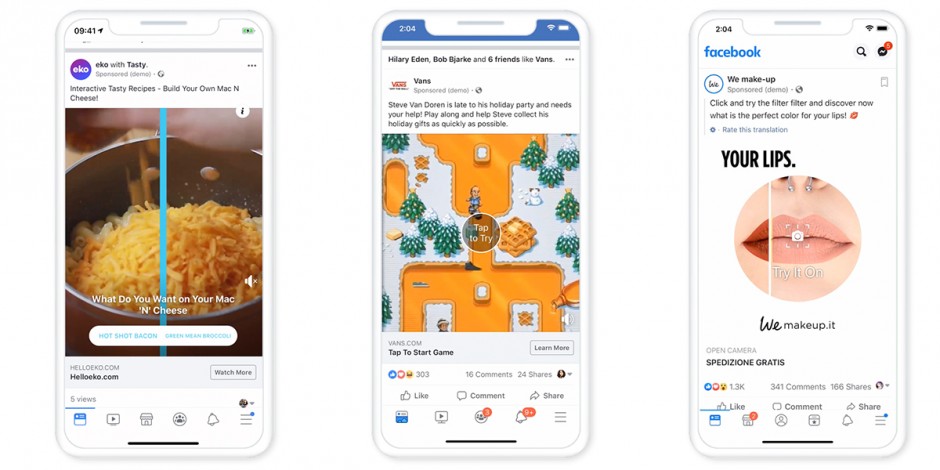 Facebook has unveiled three new commercial products – poll, playable and augmented reality ads – in a bid to satisfy advertisers’ desire to playfully interact with consumers without the need for heavyweight software development.

Announced today (19 September), the suite of ad products signals a more interactive focus in the social giant’s sell-in to brands.

The new offerings, which have been rolled out under the banner of ‘Advertising You Can Play With’, will only be available for News Feed placement for the time being.

With poll ads, brands will be able to ask users to vote on anything – from trivial questions to more serious customer research.

At a press conference in New York yesterday (18 September), the company’s vice-president of global business marketing and chief creative officer, Mark D’Arcy, revealed Tesco had been trialing the polling tech with BBH. The British supermarket used the product to ask consumers to vote either Frazzles or Skips as the brand of chip that made them feel most nostalgic.

The grocer then reduced the price of the winner as part of its 100-year anniversary celebrations.

In playable ads, Facebook has taken the product it built for its gaming clients and opened it up to brands from all sectors. Now, advertisers will be able to create gamified content and distribute it as advertising.

Vans and Uber India have already experimented with creating playable ad content, which led to a significant uplift in campaign recall, according to Facebook.

Finally, AR ads will let consumers interact with brands through their smartphone camera. Brands such as Dior and Bobbi Brown, for instance, used the tech to let customers virtually try on their products during the testing stages of the product development.

D’Arcy said the updates to Facebook’s advertiser offering represented an acknowledgement that its “audience are creators too”.

“There’s been a shift from this monologue of marketing at people … it has to be now approached fundamentally with a humility that the audience is in power as well,” he said. “Not only can they ignore us, they can contribute or not contribute.

“[The creative community] has been trying to do these things for years, trying to build little web browser ads and load code into them so they have some sort of interactivity, or built microsites to try and create some kind of experience. The thing I’m most excited about is we’ve taken this and made it lightweight, made it easier.”

Playable ads are already available to all advertisers, while Facebook is bringing video poll ads to the Mobile Feed this month. It is entering open beta for AR Ads globally in the fall.