The several ad industry parody accounts roaming the internet have established their own personalities to put the industry’s elephants in the room. Female Copywriter is brilliantly scathing. Lee Clow’s Beard is akin to a fortune in a cookie with its musings. Though not too up to date, This Ad Life is still a gem. And we may or may not have an affinity for Adweak for obvious reasons.

Which brings us to one of the industry’s more unique faux persona’s: Dong Draper. The homage to Mad Men’s talisman, Don Draper, the account whips between snarky and wholesome on both Instagram and Twitter. Some of its greatest hits include How to Get a Job at Wieden + Kennedy for Dummies, a faux tweet from Donald Trump trying to get a job at the agency and several jabs at Cannes Lions culture.

Dong Draper also cleverly takes the layout of Adweek and makes it his own. 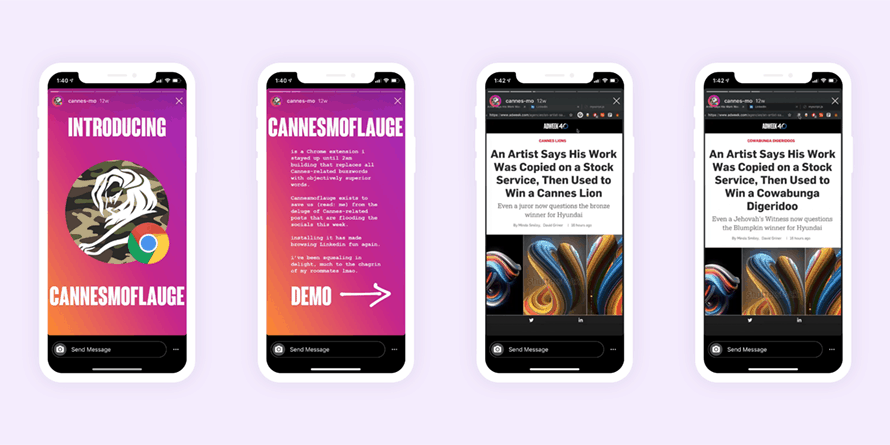 Since its inception a year and a half ago, the account’s owner has remained anonymous. But now, he has come forward to reveal himself and Adweek had a chance to catch up with one of advertising’s court jesters, copywriter Sai He.

Adweek: You really want to do this?
Sai He: I think so. Yes. Let’s do this.

Good. The big question is: why did you start this account?
It’s the lovechild of angst and detachment. I was on a yearlong hiatus at the time and missed the agency world dearly. That, coupled with the prospect of being single (again) on Valentine’s Day, proved too much to bear. I needed a distraction, so I resorted to a classic millennial coping mechanism: making memes.

But there is quite a bit of competition out there.
True. Ad meme accounts like @fart_director_v2_r1_final have tens of thousands double-tapping away at their captioned images; I couldn’t compete. Moreover, I didn’t want to. As a copywriter who nerds out on design and—to the chagrin of my CDs—uses Photoshop as often as Word, I set out to do something different: make memes with craft.

Uh-oh. You invoked the word “craft.”
Ha. Yes. Achieving pixel-perfection is my MO. I wish Photoshop would zoom to 6,400%. My OCD activates whenever I’m aligning, clipping, or masking. I’ll pay for high-quality mockups instead of using low-res freebies. It may seem like a long walk for a lame picnic, but the self-satisfaction is worth a thousand Uncrustables. I digress.

Let’s back on track here. What was your first post?
My inaugural post was “How to Get a Job at W+K For Dummies.” It remains my favorite. After a while, I set up an Instagram account. “Dong Draper” popped into my perverted noggin. I rolled with it.

Yeah, meant to ask. That name…
Honestly, it was the first thing that I thought of. Sorry to disappoint you. There was no deep research or paining myself over what it should be. It’s similar to how people use names like “Dank Sinatra” “Lil Intro Vert” “Postmates Malone” etc. on the internet.

The account didn’t exactly take off at the beginning.
No, it didn’t. As my audience slowly grew, I began posting to Instagram Stories lower-effort and zeitgeist-y content that didn’t warrant standalone posts. To my surprise, followers were quick to engage and respond in my inbox. To my delight, stranger banter would be heaps of fun.

We have to imagine there’s some funky stuff going on in your DMs.
This is very true. My DMs are a cacophonous hootenanny. They include complaints about smelly art directors, advice on getting over a breakup, punny back-and-forths, empathetic exchanges of #agencylife, silly side project brainstorms and recruiters who share funny memes. Followers also send me creative compliments. “You’re the dong dot com.” “More accurate than @Adweak.” “A riot and a sage voice at the same time.” “Hurtful to copywriters.” “Artful trolling.” I love and thank you all for sliding in.