Pinterest, an online product and idea discovery company, is focused on carving out a piece of the global digital advertising space. While Pinterest is unlikely to replace online advertising giants like Google, Facebook or Amazon it should attract a small portion of digital ad spending, which has an addressable market of over $500 billion by 2023.

Pinterest Inc’s (NYSE:PINS) stock price has fallen roughly 25% from its 52-week high, mostly due to multiple adjustments. At $27.3, it is fairly valued based on my valuation estimates. 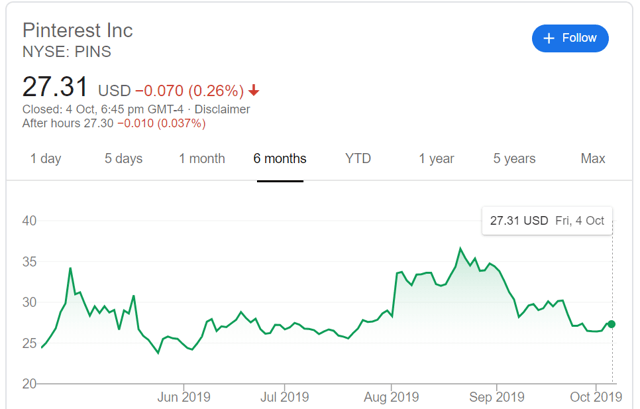 Unlike other social media platforms, Pinterest’s platform sends people straight to products with the purpose of finding different types of products or ideas to make or buy. People on the platform also interact with the products in a way that increases their intentions to purchase a product quickly or at some point in the future. They save, post and exchange pictures and videos of products that create an emotional connection which makes them more likely to buy it. This is more attractive for advertisers as users on other social media platforms do not have similar purchase intentions as those on Pinterest. The average revenue per user grew at 29% globally, which indicates Pinterest users have been growing in attractiveness to advertisers. 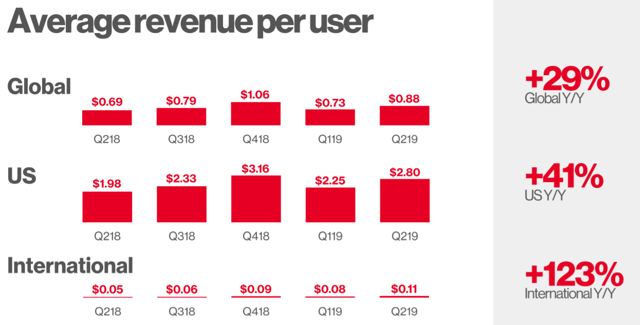 Pinterest has around 300 million monthly active users, with about 30% coming from the United States and the other 70% are international users. User growth has been rising steadily above 20% for the past few quarters, indicating some form of network effects. With more pins from existing users, Pinterest provides a better experience to the next user that joins. Hence, this creates a cycle that makes it very difficult for new startups to create similar experiences that copy Pinterest’s platform. 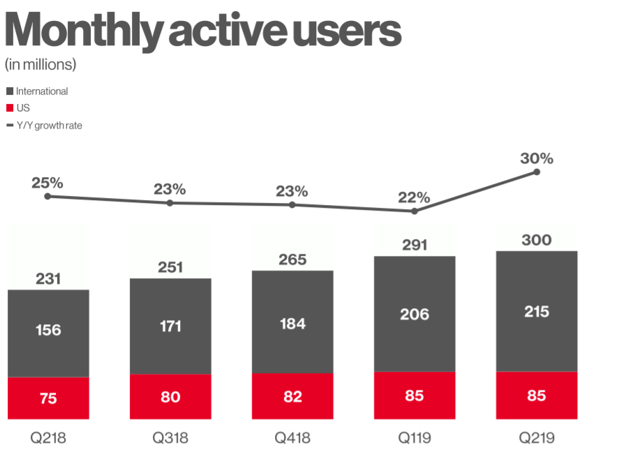 The social media competitive environment is constantly changing and is highly dependent on consumer preferences. The key metric in a social media platform is engaging so that users spent the maximum amount of time on its platform to attract advertisers. A new big hit like Tiktok could easily cause users to divert some of their time from incumbents to new-hits social media platforms. This puts less popular platforms like Pinterest (compared to Facebook and Instagram) at risk in generating significantly more ad dollars consistently.

With tighter regulation potentially happening to social media platforms like Facebook, Pinterest would be part of those regulations as well. So far there has been little negative news on how Pinterest uses pinners’ data and how this may be shared. However, management has to anticipate potential problems and preempt them before they become big issues. Moreover, Pinterest also banned anti-vaccination misinformation in February this year. This means that Pinterest is also prone to potential fake pins and information. Management has to ensure that fake pins are kept to a minimum so as not to degrade the user experience on its platform.

To value the company, I used a DCF model with the following assumptions:

1) Revenue growth at 35% for the next five years, then dropping to 2% in perpetuity starting from the year 2025. This growth is likely to be driven by overall growth in digital advertising and Pinterest adding more advertisers and the sale of more ad inventory. It is likely that most of the growth will come from increased revenue per user as user growth is likely to decelerate in upcoming years. However, if users are unengaged on Pinterest’s platform, advertisers might go straight to platforms like Amazon and put some downward pressure on future revenue growth. Pinterest also likely has to invest in some e-commerce capabilities for future growth drivers.

2) Operating margin of 35% from 2027 onwards. Platform companies generally have high operating margins due to their high initial fixed costs and low incremental costs. As Pinterest enhances its system to handle more transactions programmiatically in real time, costs should decline and gross margins are likely to expand. As Pinterest’s network effects help revenue to grow faster than operating costs, the associated operating leverage should lead to operating margin expansion. However, if Pinterest has trouble keeping users engaged, it might lead to higher-than-expected sales and market expenses which puts downward pressure on operating margins.

3) A sales-to-capital ratio of 2 is in line with its platform peers. Developing and maintaining platforms is not capital-intensive, so I estimate Pinterest will be able to generate $2 of sales with every $1 in incremental capital.

The value I derived for Pinterest is roughly $12.2B for the entire company. This represents a 1.3% upside from its current price, which means that Pinterest is fairly valued. As with all DCFs for high growth companies, my point estimate valuation of $27.7 is likely to have a large spread of possible outcomes. To overcome this shortcoming, I compare its pricing multiples against similar companies.

Compared to peer companies, we cannot really conclude if Pinterest looks expensive or cheap. Pinterest is cheaper than Zoom but more expensive than other comapnies on the comparison list. However, Pinterest has the lowest operating margins which makes it riskier than other companies as it would have the highest need for capital in the near term.

Potential investors have to decide if they have a strong conviction in Pinterest’s future. If they believe that Pinterest can deliver better growth rates than my assumptions in the model, it may a good time to enter this company as it is fairly valued and have come down by 25% in recent weeks.

Disclosure: I/we have no positions in any stocks mentioned, and no plans to initiate any positions within the next 72 hours. I wrote this article myself, and it expresses my own opinions. I am not receiving compensation for it (other than from Seeking Alpha). I have no business relationship with any company whose stock is mentioned in this article.