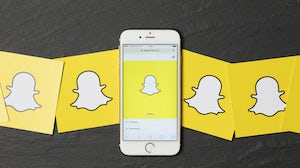 Many fashion brands abandoned Snapchat but some that stuck around have found success. | Source: Shutterstock

Dynamic ad platforms pick items from advertisers’ product catalogues and target them automatically to people with relevant interests, removing the need to manually advertise each product individually. Snap is betting the convenience will attract more advertisers.

For example, Snap could automatically show sneakers to Snapchat users that have an interest in sports, displaying items from retailers that have uploaded their product catalogues.

David Herrmann, an independent ad buyer based in Los Angeles who works with direct-to-consumer brands, said the new function was a compelling option for “direct response-focused” brands.

Snap said while global advertisers would be able to use dynamic ad platform immediately, their campaigns will initially only reach US Snapchat users, with a global rollout scheduled later.

Snap remains a small player in the global digital ad market with 0.5 percent revenue share, compared with Google at 32 percent and Facebook at 21 percent, according to research firm eMarketer.