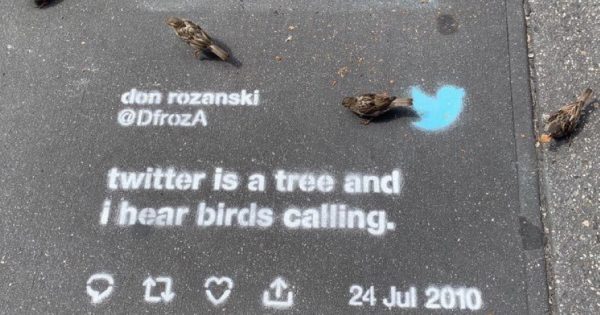 Twitter took its latest campaign to the streets of its headquarters city of San Francisco—and we do mean to the streets, as spray paint-like chalk and stencils were used—but while some users were amused, the Department of Public Works was not.

Chief marketing officer Leslie Berland shared some of the stenciled messages in a tweet, and Ryan Kost of the San Francisco Chronicle provided further details, reporting that the one that reads, “Twitter is like running up the down escalator,” appears in front of an escalator that leads to a Bay Area Rapid Transit station, while a trash can was the inspiration behind, “Twitter is garbage and I am a raccoon.”

Department of Public Works spokeswoman Rachel Gordon told Steven Musil of CNET, “These ads are not sanctioned. Our sidewalks are not to be used for billboards. Our street cleaning and street inspection teams have been made aware of these illegal advertisements and, if it becomes necessary for us to remove them, we will be sending a bill to the offender.”

She also told Kost, “Twitter has the resources to use appropriate venues to advertise their company.”

A Twitter spokesperson said in an email, “We looked into what happened and identified breakdowns in the process for meeting the cities’ requirements for our chalk stencils. We’re sorry this happened. We’re committed to working in full compliance with all city regulations and are putting processes in place to avoid anything like this from happening again.”

Kost reported that the stenciled messages were part of a larger campaign that kicked off earlier this week in San Francisco and New York, and pillars in the Powell Street BART station were wrapped in tweets as part of the campaign, which also occupied the station’s billboards.

Outfront Media, which handles advertising for BART, told Kost the kind of campaign Twitter is running at the Powell Street station typically runs for one month and costs $236,000, plus $85,000 for production.