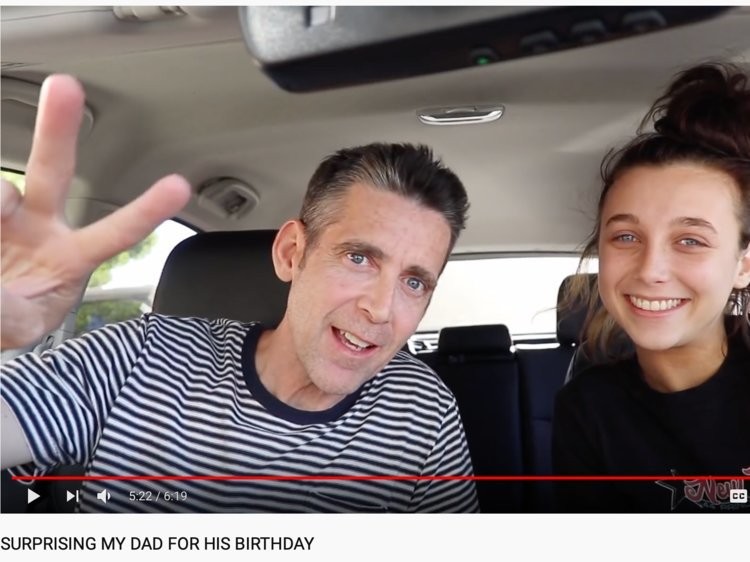 Emma Chamberlain’s parents knew things were getting serious for her on YouTube when she began making money through Google AdSense only a few weeks after posting her first video — a 2017 summer look book, filmed by her dad — the summer before her junior year of high school.

“She went crazy that whole summer, posting as much as possible,” Emma’s dad, Michael Chamberlain, told Business Insider in a recent interview. “By the end of the summer, it was pretty clear that things were going well. Her AdSense was like a decent job at that point.”

Emma had decided to start her channel during her summer break in 2017 with the help of her dad, who also started his own channel, “ chamberlainpaintings” (to share his passion for art and oil painting). Michael was also the cameraman behind many of Emma’s first videos.

When Emma first launched her channel, she uploaded relatable teen-style vlogs, from taking her driver’s license test to going on trips to Target. Michael, an artist and photographer, would take day trips with Emma, capturing footage and photos of her for her emerging social media pages.

Now two years later, Emma is one of the most popular creators on YouTube. She has eight million subscribers and another eight million followers on Instagram. And, with the help of her parents, Emma has built a lucrative business around being the internet’s favorite relatable teen.

Emma is known for her coffee addiction and her unique editing style, which consists of added sound effects (like sipping sounds, whenever she drinks coffee) and using footage of herself editing the video cut into the video itself. Her most popular videos today are the ones where she vlogs her experience hanging out with creators James Charles and the Dolan Twins, like “Road trip to Vegas ft. Dolan Twins & James Charles,” with 27.9 million views.

But with all of the success, there have been some challenges, and Michael spoke to Business Insider about the advice he gave Emma when she quickly rose to fame at 16 years old.

What does it feel like when your daughter suddenly becomes famous?

“When she blew up and started getting a lot of viewers, I think that kind of overwhelmed her at first and there was this creative pressure that I totally understand,” Michael said.

Michael said he wasn’t nervous about Emma’s sudden rise, and that he and Emma’s mom were focused on making sure she had all of the support she needed to be successful.

Still, when Emma decided to leave high school at the start of her junior year to focus on YouTube full-time, it was tough for the family to adjust, he said.

“She was new to having to structure her whole day,” Michael said. “Yet she was happy on the one hand because she could continue to create.”

The family soon decided it would be best for Emma to move from near San Francisco to Los Angeles, and since then, she has thrived, Michael said.

“That was a hard period of time, from when she left school to when she moved to LA,” he said. “It was just a challenging time.”

‘There’s a lot going on behind the scenes’

Michael was a fan of YouTube well before Emma became interested in the platform. He said that after getting rid of his TV 12 years ago, he turned to YouTube for access on information and entertainment.

For him, the creation of videos has always been its own form of art. Michael said that Emma grew up in a “creative cottage” with access to musical instruments and art supplies.

Emma’s parents are now both involved in her online brand. Although her parents aren’t together, they remained friends, and have become a team to support her.

“There is a lot going on behind the scenes for sure,” said Michael, who helps Emma with the creative aspects of her brand.

Emma’s mom assists in administrative tasks and in organizing the business in general, Michael said. Emma also has a podcast and sells merchandise online through the ecommerce platform, Shopify.

His advice: ‘Remember that you are talking to one person’

Emma felt some creative pressure when she became wildly popular online, but Michael said he told her to never forget that YouTube is about the one-on-one communication.

“When you talk to the camera, remember that you are talking to one person,” he said. “That makes it more personal and less overwhelming when it comes to the sheer volume.”

He said Emma has been lucky and hasn’t experienced a lot of hate online. When she started to get dislikes on her videos, he said he would advise her to think about it as a statistical thing.

“When you start thriving or succeeding, the haters are going to come out,” he said. “It’s just part of the deal.”

Michael said that because of Emma’s fame, there are now some public places where she can’t go. But he added that this is all a part of her journey, and not something him or her mom plan to shut down.

“What are you going to do anyway?” he said. “To be honest, most people are really respectful. Oftentimes they just want to take a picture.”

Michael said he’s more likely to engage in conversation with the fans then they are with him and Emma. He’ll find himself asking questions, but said they’ll usually leave after the photo is taken.

For more on the business of being an influencer, and a breakdown of how YouTube creators make their money, check out these Business Insider Prime stories below: